Many salespeople just “wing it” when talking to clients. They think a little product knowledge and a decent personality are all it takes to win clients and close sales. And while those traits can help, primarily with those who were already predisposed to buy from you, they certainly won’t close everyone. Nor will they take the place of extreme competence — being exceptionally good at what you do and how you do it.

You know it often looks like those who are extremely successful at selling are able to just walk into a situation, say whatever comes into their minds and close sales. But that is very rarely, if ever, what’s actually happening.

In most cases, those experienced sales pros are using very specific and strategic communication — they’re saying things in a certain way and in a certain order that is likely to get people to say yes. Some have been doing the right things for so long, they might not even realize what they’re doing any more. It becomes second nature. It’s a state that some refer to as unconscious competence.

But before we get to that, let’s talk about the previous stages that most people have to move through to get there. First is…

This is the stage where people don’t even realize they’re doing things wrong, let alone WHAT they’re doing wrong. They either don’t think about their actions at all, or they think the actions they’re taking are probably fine, but outside circumstances are blocking their success.

The unconsciously incompetent are easy to spot, because they’re often blaming others for their poor results. They’ll blame the market they’re in, the quality of the leads they got, the unreceptiveness of their prospects, an uncooperative economy, too much competition, too little time, their boss (if they’re an employee,) their employees (if they’re the boss,) or any other uncontrollable factor outside themselves.

The unconsciously incompetent are simply not yet conscious of the fact that they can and should be doing things differently. So if they never make it out of that stage, they either quit, fail or get fired.

But those who eventually admit to themselves that there are things they need to learn, can pass into the next stage, which is…

…meaning they now recognize that there are things they need to learn, things they haven’t yet mastered. Things, that, once mastered, will make all the difference in their business or sales careers.

Now you would think that when someone reaches this state, they would be excited to do everything possible to quickly identify the specific areas that need to be fixed and address them right away. But in many cases, that doesn’t happen. Instead, they might just continue to muddle around, trying this or that, experimenting with any shiny new object, while frustrating themselves, their prospects, their coworkers and everyone else around them. You can spot those in a state of conscious incompetence, because they’re often distracted, frustrated, angry, exhausted, exasperated or all of the above. Those who never make it past this stage will also quit, fail or get fired. Which is why the rate of small business and sales failure is so high.

But those who do make it past this stage, either by blind luck or by actually seeking out the people, strategies and systems that can help them, will then move on to the next stage, which is…

You can identify this group because they’re feeling pretty good, generating revenue, and because they know they’re on the right track.

Those who persevere through that stage, eventually reach the level we started with, which is…

They get so good at doing the right things, so well and consistently, that it becomes second nature to them. They no longer have to consciously think about what they’re doing or how they’re doing it, because it becomes baked into their DNA. They reach that state where their actions flow and feel completely natural.

So here’s the deal. If feel like you’re not yet producing at the level you’re capable of, it’s probably because you haven’t yet reached the necessary levels of unconscious competence.

If you want to fix that, I would encourage to check out my web presentation entitled Programming Clients to Choose You. Then schedule a complimentary strategy session with us, to see how we can help, and join our growing community of exceptionally competent business owners and sales professionals who are focused on creating top of mind awareness and dominating their markets. Start with our free webinar now at topsecrets.com/choose.

If you’re tired of flat or declining sales and losing business to your competitors, be sure to check out my latest web presentation entitled Programming Clients to Choose You. Who are your very best prospects currently programmed to buy from? Is it you? Or someone else? If you want it to be you, visit topsecrets.com/choose and register for the free presentation now. That’s topsecrets.com/choose. 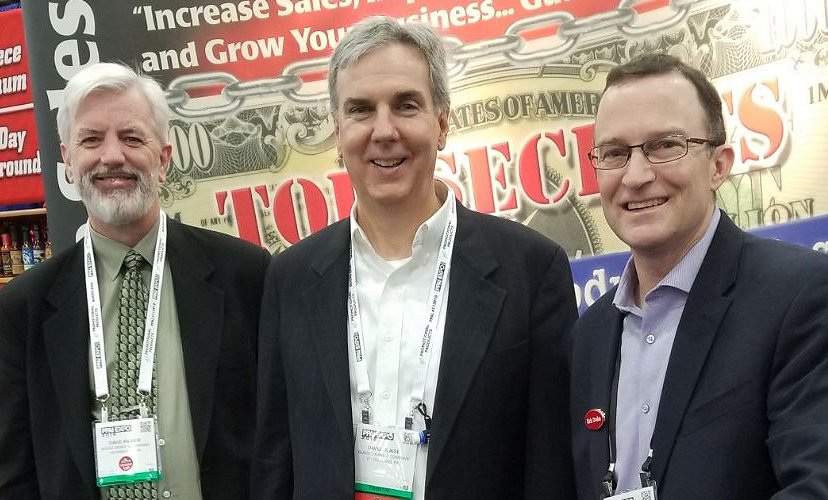 Join Dave Kilmer, David Blaise and Rick Drake at the PPAI Expo in Las Vegas. Be among the first to stop by Booth #2855 and get access to a digital copy of our free training.

Program Clients to Choose You